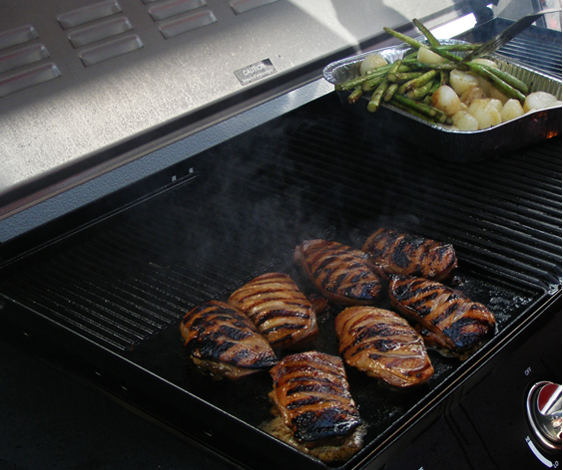 A Very Brief Guide to the Alfresco Barbie

Way back in 1983, Paul Hogan starred in a TV commercial that aimed to get Americans to visit Australia. Toward the end of the commercial, Hogan promises to “slip an extra shrimp on the barbie.” And that’s how barbecue virtually launched Australia’s tourism boom.

Australians just love outdoor living and an Australian resident without a barbecue is a rare oddity. From the days when a barbie meant a billy can on an open fire to today’s gas-fired ranges that look like the set props for a sci-fi movie, barbecuing remains an enduring social obsession and every Aussie’s inalienable right.

And so firing up that barbie is not only encouraged, it’s downright expected! Let us guide you through some of the finer points of hosting the ultimate alfresco barbie.

The Meat of the Matter

Paul Hogan may have jump-started Australian tourism by promising to slip an extra shrimp in, but most barbies commonly feature slabs of meat or sausages. And selecting the right kind of meat is the first step on the road toward a glorious barbie. Of course there really is no “right” meat because this is a matter of preference or of what is readily available on hand.

Lamb is a barbie favourite because the meat actually benefits from fire better than other types and you can grill practically any cut of lamb. The first thing to note is the age of the sheep from where the meat is gotten. Lamb refers to sheep aged one week to eight months and its flesh is pink. When slaughtered beyond eight weeks, the sheep’s flesh starts to turn dark, almost purplish, and the meat is now referred to as mutton. Lamb meat is more tender and has a milder flavour. Mutton tastes more gamey and may be tougher.

The preferred cuts for grilling are the loin, leg, rump, chops and ribs. It’s also better to tenderise or marinate the meat before cooking.

Sausages are great for barbies because they always end up tender and juicy (unless you mess up the grilling, of course) and perfectly seasoned all the way to the centre. They cost a lot less than prime cuts of meat, are neatly packaged into perfect serving-sized cuts and come in a variety of flavours to choose from.

First determine the cut of beef you want for your barbie. The right cut ensures that the meat stays moist and tender after cooking. Some cuts are naturally moist when cooked over an open flame and require little or no preparation before grilling. These include the higher grade cuts such as porterhouse, ribeye, top sirloin, t-bone and tenderloin steak. Cuts like bottom round, round tip, sirloin tip and top round need to be marinated so that the meat stays tender.

Next you need to select a grade of beef. Australian beef grading is determined by a system called Meat Standards Australia (MSA) that predicts the quality of the eating experience people think the meat will provide. The system considers the information submitted by the producer and attributes of the meat itself, including meat colour, marbling, fat depth, carcase weight, maturity and pH levels. MSA logos on the packaging and on the meat itself help you identify if the meat is of MSA quality. Obviously, you will want to buy the best quality beef that fits your budget.

Chooks make great barbies; the meat is highly nutritious, costs less than beef or lamb and is said to be a much healthier alternative as well. The secret to great chicken barbecue is to choose a high quality bird. But that may be a challenge, especially with all the labels that use all the right keywords but add to the confusion. Essentially, what you want are chooks that were pasture-raised. We can then assume that a significant part of what the bird ate came from their natural environment, making for better flavour. You also want birds that were 100% organically raised — no hormones, no antibiotics, no pesticides and no animal byproducts.

Of course, the more ideal the chicken, the higher the cost, so it will be a matter of balancing what you can afford with the compromise in quality that you can tolerate.

Other things to watch out for when buying chooks for the barbie include checking the skin colour. Fresh chicken should be pinkish and you should avoid buying any other colour, especially gray. Plump-looking birds or pieces are also a good sign, but transparent, patchy and torn skin are danger signals. Lots of blood in the package may mean that the chicken has been handled too much and too roughly or that it has been frozen and thawed several times. Either way this is not good because there is an increased chance the meat may have been contaminated by bacteria.

So now we come to that “extra shrimp.” Actually, it was a prawn that Paul Hogan slipped on the barbie, and prawns are excellent for barbies, along with all sorts of fish, calamari and shellfish. Even yabbies have found their way on to the grill. In fact, there is no fish, shellfish or crustacean that cannot be grilled.

Even vegans can enjoy a very good, meat-free barbie. The trick is to use suitable protein substitutes such as tofu, seitan and tempeh. Then throw in some grains, potatoes or some other carbs and antioxidant-rich vegetables for a splash of colour and flavour.

If you want something more exotic and adventurous, you are fortunate because Australia has abundantly diverse wildlife and there is no shortage of options for bush tucker type cuisine. Kangaroo, croc and emu are rich sources of meat for the barbie. And if that’s still not bold enough, you can always slip some witchetty grubs on the grill.

There are four general types of barbie grills. Before you head out to Bbq Galore, this quick guide will help you consider which one to get.

The Heat of the Moment

You’ve got meat and your grill is ready. The last ingredient for an awesome barbie is heat. There are two main sources — gas or charcoal. There is a raging debate that goes on between these two camps. Purists will tell you that only charcoal can sear the meat to perfection and give it that smoky awesome flavour we look for in a barbie. But gas enthusiasts insist that flavour comes from fire, not smoke, and that gas controls this aspect of the barbie much more precisely.

Regardless of where you stand in this eternal debate, the important thing is to be prepared. If you use charcoal, have enough on-hand before you light up the grill. If you use gas, have an extra tank or two ready, especially if you are cooking for a big number of guests.

The worst thing that can happen is for you to run out of fuel in the middle of the event and serve undercooked meat or not be able to serve any more food. That would be “game over” for your barbie.

A Few More Tips and Tricks

Here are a few more tips to round up your barbie.

Now light up that barbie and go be the hero of the party!

How to get a property value ...
As Perth homeowners, we always find reasons to enjoy the outdoors from the comforts of home. We love basking in the sun. Some while burying thei...
How to refresh your patio lo...
Everybody wants to spend a lot of time in the outdoors. Especially those of us blessed with an awesome Perth landscape, there’s a lot of r...
How to rejuvenate your backy...
While we currently have ourselves preoccupied on bunkering down for the winter, a few of us are already preparing (or to be more accurate, longi...
Back to Article
Lets Get Started With A Free Consultation
Book Now

Lets Get Started With A Free Consultation
If you have any questions at all about your upcoming project or would like a free quote on, please enter your details below and we’ll get back to you as soon as possible.
Or Call to discuss
(08) 9322 3777